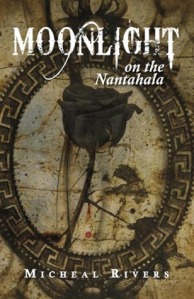 Moonlight on the Nantahala By Micheal Rivers

His life began deep within the mountains of North Carolina. Edward Caulfield was a dedicated craftsman who appreciated the finer things in his life. As a young man he fell deeply in love and married a beautiful young woman he did not want to live without. Fate took her from him early in his marriage and he lived the rest of his life as a shrine to her. In the twilight of his years he met a troubled young woman and their relationship turned the tide for them both. In his efforts to help her, their lives were changed forever learning from each other. In a world filled with romance, deceit, and sorrow Edward left her a legacy fulfilled with the promise of finding, “The Perfect Rose.”

This is the story of Edward who lost his true love Celia many years ago. Edward befriends a troubled young woman called Lena and after years of Lena sitting at the bottom of the garden to his old house they eventually speak and by eventually I mean 3 years!

The story is sweet, it’s about true love, friendship and family but I found the characters were slightly boring. Also I found the paranormal thread a little weak.

Other reviews have given this book more stars and I am willing to say I may be missing something within the book but this is my review so I can only offer my honest opinion.

All I can say it read it for yourself as we all read a different story in each book.